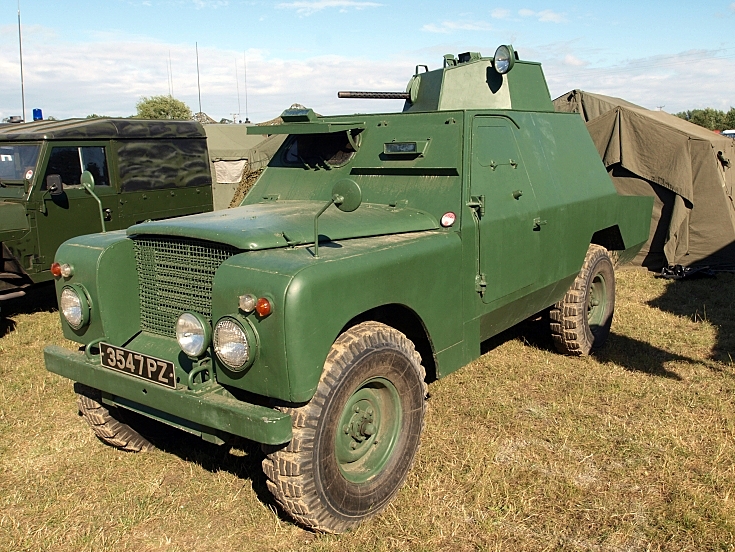 Mk1 Shorland Shorland Internal Security Vehicle. Registration '3547PZ'
Shorland Armoured Car, known in Land Rover Circles as the boat tail Shorland.
The Shorland is a long wheelbase Land Rover with the turret of a Mk 2 Ferret armoured car. The vehicle has upgraded suspension to deal with the extra weight of the armour.
Picture added on 24 April 2011 at 09:02
This picture is in the following groups
War & Peace show 2010, Kent, England, United Kingdom
add commentComments:
Interesting vehicle! Looks very formidable, though the weapon in the turret is simply a 7.62 machine gun. In terms of fire power, much less formidable than the British army open 110's (WMIKs - weapons mounted installation kit)which are either fitted with a front and rear 7.62 GP machine gun, or even a front 7.62 plus a rear .50cal (scary, awesome weapon)! Mind you, a scout car isn't really meant to get involved in pitched battles, anyway. Daresay the crew would like the armour protection, but it could be a bit hot inside if used in Afghanistan...

Added by R A Howell MCIBS on 03 November 2011.
It isn't actually intendedas a military scout car, more for internal security (ie police) duties. The ones in use by the army in Ulster were actually ex-RUC B-Specials vehicles. The VRN indicates such a vehicle, although the colour scheme is way off the mark!

Added by Roger Greenaway on 04 November 2011.
"colour scheme is way off the mark!" What colour scheme should it be?

Added by Clive Elliott on 24 February 2012.
according to my late father-in-law (through death and not divorce), who was a B-special, they were painted grey, before the UDR got hold of them and did them up in olve drab (which was the colour that I saw them in). I did some cross checking, and found your article on the Shorland and your vehicle in particular. Again this could be a case of failing memory (father-in-law, not me!), and my own memories of Army use. I'm surprised that they used this colour when a Home Office approved green (ie as for AFS/civil defence) was already in use.

Added by Roger Greenaway on 25 February 2012.
RUC Shorland Armoured Patrol Cars (SB300) were never painted grey, although it is tempting to suppose that they might have been as most other forms of Land Rovers they used were certainly grey. Although it might sound shocking some Series 1 LWB Land Rovers were actually beige! Anyway RUC Shorland Armoured Personnel Vehicles (SB301 & SB401) were indeed grey as were the other RUC produced armoured Land Rovers. Sometimes there is blurring in people’s recollections as what may not always be a Shorland SB300, considering these went out of RUC service 42 years ago.

Having said that about 25 years ago I took a picture of the only other ex-RUC Shorland to survive which was at Beverley MAT. Unfortunately it was painted grey as it was wrongly assumed it should have been that colour for a TV drama film. It also had a Mk 3 Shorland based on a Series 3 Rover & a Mk 2 Pig all in scenes depicting August 1969, so the general technical research is in doubt!

As you noted my Shorland was being displayed in its RUC role hence the Belfast registration (for which it is road registered) rather than its later UDR registration 27BT68. I have gone to great lengths to reproduce the exact colour. Firstly there is no sign of grey on the armour at all; the basic vehicle was painted in yellow primer followed by the satin finish green it is now painted. When it was acquired by the UDR it was painted copiously in high gloss Deep Bronze Green & rather surprisingly disruptive matt black. On this finish was placed the UDR transfer. When I first restored it 25 years ago I reproduced the gloss DBG with matt black copying the original pattern very closely. Although the reason for doing so was displayed on information board & predictably it produced a fair amount of outrage.

In its current RUC context there is an information board beside the Shorland on the side out of view in this image, where it explains the reasons for its colour scheme. I was able to lift away a large chunk of paint from one wing revealing a clean area of the original paintwork. I took the wing off & drove 50 miles to a paint specialist to match it & paid £106 for 5 litres of paint. When I painted a test area I felt that it wasn’t a good enough match & besides there could be the criticism that what I was trying match to paint that had been faded by the sun. Luckily the lower section of one windscreen demister had not been painted DBG & was in a place were the sun can’t shine. As it happens it was identical to the patch revealed in the bonnet. By mixing my own paint I have found a very close match.

The Shorland that was at Beverley is owned by the National Army Museum & is currently stored at SEME Bordon. When I viewed it a few months ago it was reassuring to find still significant areas hidden from view that were an exact match to the RUC colour I had identified & reproduced on mine despite that this one (AOI 4054) entered RUC service more than 3 years later.

This colour was probably the same green as used on the RUC Humbers & one would expect it to be a readily available shade. A visitor to the RUC workshops in 1969 recorded that the Humbers were painted “Rustoleum Green”. I have been unable to establish, even from Rustoleum, what green shades of Rustoleum were available in the 1960s. This is not just for the Shorland for I have a RUC Humber as well.

I’m sorry to have gone on rather but I feel I need to put my case for anyone reading the earlier comments that have been made about my restoration.

Added by Clive Elliott on 26 February 2012.
The perforated barrel shows that the machine gun on this vehicle is a .30in Browning, and not a 7.62mm (although Shorlands normally carried the Bren LMG).

Added by G-TOMM on 26 February 2012.
I notice a number of comments posted that seem to be drawn from straight from an online encyclopaedia. One only has to take a phrase such as “quickly became known in Land Rover Circles as the boat tail Shorland” to find that this information is replicated on dozens & dozens of vehicle sites & forums without adding any first hand knowledge or correcting misconceptions. These misconceptions repeated enough times & in enough places become accepted as fact, addressing the ones posted on here:

I have owned my Shorland for over 25 years & over that time have spoken to many people who have used, designed, built & sold Shorlands, none of them are at all familiar with the term “boat tailed”. Since the internet it means I now get told by people that I have a “boat tailed Shorland” which triggers endless silly questions about how well it floats.

It does not have the turret of a Mk 2 Ferret, although clearly influenced by it, the specific design & manufacture was carried out by SB&H.

As pointed out the gun on my vehicle is a .30in Browning.

Although this vehicle was issued to the Reserve Force of the RUC it was an entirely different organisation to the Ulster Special Constabulary (USC) who at that time was comprised of just B Specials.